A successful visit to Sindur today, in the glorious sunshine.

A recent survey of the boat suggested that the wheelhouse roof was delaminating. Further investigation was required. So I visited today to remove the headlinings to take a look at the condition of the roof from the underside.

There has been water ingress for sometime, as indicated by the staining on the woodwork, so this needed investigation, as it could be the cause of the delamination.

I was keen to see behind the headlining for two other reasons.

The first is that Sindur has a curious ‘bump’ on her cabin roof and no one knows why it is there. Removing the lining revealed that it is just a curious void, with no obvious purpose.

The second reason for removing the lining is to see how the various aerials, lights, mast and stays are fixed – and the routing of the various cables. Sindur has quite a large mast to support the radar scanner. This is steadied by a mass of stays and only a small base. The nav lights are ultra modern LEDs that do not suit the craft at all.

The plan is to swap the mast for a shorter, sleeker design with a larger base for stability, that will do away with the stays. The nav lights will be changed for a traditional design and be mounted on the new mast too, reducing the amount of holes drilled in the roof.

The headlinings came away nicely which is testament to the Camper & Nicholsons build. However the wiring beneath is a bit like a bowl spaghetti, probably due to retrofitting of equipment, but I think it will all be workable.

So with this all worked out, I turned my attention to removing the diesel filler cap that refused to budge last week. I ended up drilling one edge of the cap so that I could tap it around with a screw driver and a mallet. This failed to budge it so I drilled through the edge and let wd40 run into the thread. I left if for an hour and then gave it a tap and she opened a treat. 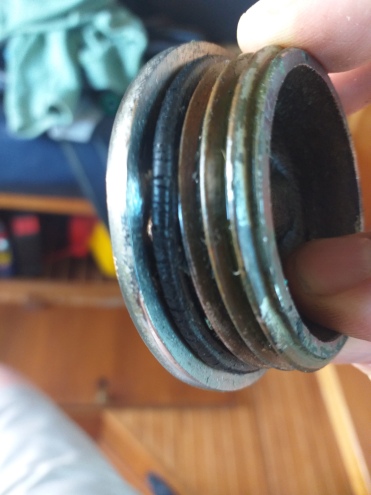 A successful day. So why a pain the rump? Well, Sindur has been placed on chocks in the yard with her stern touching a gorse bush, exactly where the boarding ladder lowers – note to self – take hedge cutter next week!